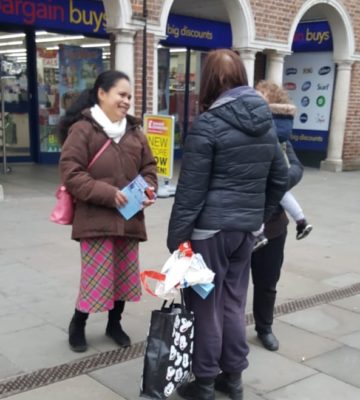 A very large number of tracts were handed out, by which we were much encouraged. One young man talking with one of our church helpers, Mr Allen, insisted, that he was quite able to work out life for himself, and so did not need the help of God. It was tragic to see him so adamant in this conviction, as our brother explained his great need to him.

A number of passers-by shouted out their strong disappoveal of the preaching, with one claiming that he had no sins for which to be forgiven. Another claimed that we had no basis for saying that Jesus Christ rose from the dead other than a book written by men. I responded that the human authors were all inspired by the Holy Spirit, and that this book was the word of God, and had proved itself to be such in that it constantly has the power to change lives. At that, he scoffed and discontinued the conversation.

Neverthless, we were pleased that the preaching was provoking responses and stirring up the strongholds of Satan in the hearts of fallen men. May all who heard today be drawn to faith in the only Saviour, and thus flee from the wrath to come.