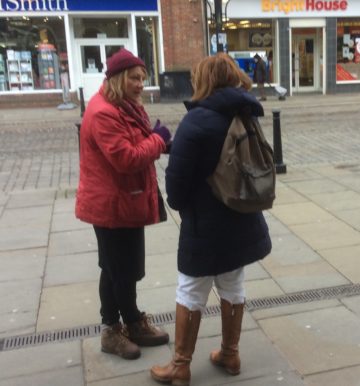 Pastor Simpson was preaching the gospel in a very wintry High Wycombe on Thursday 31st January 2019. A number of conversations were entered into by our two lady helpers, including one with a Christian from Rumania, who was thrilled by our presence and activity. A good number of our tracts based upon the prodigal son and entitled, ‘A story which can change your life’ were handed out.

One passing non-believer said that he did not believe in imaginary beings and that we had no evidence for the existence of God. As he walked away, thinking he had ‘scored a winner’ against the preacher, Pastor Simpson shouted out to him that the sun rising this morning was evidence enough that the Creator God was speaking to him.
The preaching included a reminder to the passers-by of the national shame which is the killing of children in the womb, the redefinition of marriage contrary to God’s holy law, and the ignoring of the Lord’s Day by means of unnecessary commercial activity.

One person suggested to Pastor Simpson that he hated people of different faiths. He was quickly disabused of such a notion. Why are we preaching in the high street at all? It is an aspect of love to our neighbour, that he might be rescued from the horrors of an eternal condemnation.